Le Figaro Étudiant has just published the 2022 ranking of the best engineering schools, as well as the associated thematic rankings.

Evaluated according to a list of criteria that take into account academic excellence (research, double degrees, level of graduates, etc.), international influence (international rankings, expatriation abroad, percentage of graduates working abroad, etc.) and relations with companies (salaries, junior companies, networks, etc.), ENSAE Paris is ranked 9th in the general ranking of schools of excellence this year. It is also ranked second in the ranking of digital, computer science and mathematics engineering schools, close to two other IP Paris schools, Télécom Paris (1st) and ENSTA Paris (tied for 2nd). This is the third year in a row that ENSAE Paris has been ranked in the "top 10" of engineering schools of excellence and on the podium of the best schools for digital and mathematical sciences. 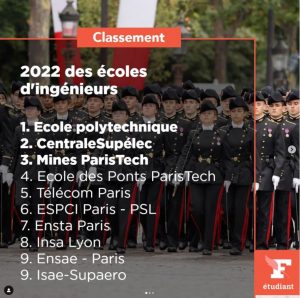